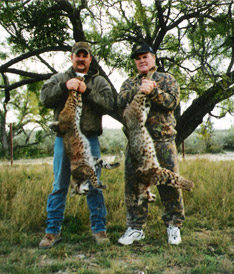 My mom likes to tell the story how as a little boy I, Clay Pope, was always setting traps and catching imaginary animals. To her surprise my first official catch was the neighbors ferrets at age four. Even as a child hunting and fishing were a big part of my life. As a young man I gained more freedom and a drivers license, from then on I began predator hunting all over this big state of Texas. A good friend recommended I guide a few predator hunts in my spare time, and Pope Brothers Varmint Express was born.

It Started with Predator Hunting

At that time there was a sudden interest in predator hunting sweeping the nation. To date Predator hunting is still one of the fastest growing aspects of the industry and a big part of my business. I had no idea what I was getting myself into to say the least. It was a bit slow in the beginning. I made some brochures, my brother Jeremy designed a website, and I did a little advertising. Shortly after this I started managing a conglomerate of cattle and hunting ranches which gave me more than enough private land to offer all the predator hunts I wanted to guide.

At this time I had no intention of becoming a full time outfitter 365 days per year, it hadn’t even crossed my mind. I had been married a short time and my wife Holly and I had a newborn daughter, Lily. The steady ranch work was very good for our young family. After two and a half years of managing all the day to day operations including hunting guests, I found my calling in life as a hunting guide. While on the ranches I was exposed to many people who taught me the basics for what was to come.

Expanding to Whitetail and Exotic Hunting

I visited many of the exotic sales in Texas and learned as much as I could about exotics. We were responsible for managing over 40 species on the ranch where we lived. My boss at the time introduced me to Jesus Martinez owner of Bushlan Camouflage. Jesus also had a television show on the Outdoor channel and I was given the opportunity to film hunts for the show. Jesus introduced me to several landowners and allowed me to guide hunters on his ranch outside of Laredo Texas.

Later I had the opportunity to guide Keith Warren and Chip Class for another show on the Outdoor Channel. This only added to what I was learning about the hunting industry. I was still very young at the time, twenty-five, when we decided to take another job helping a ranch establish their hunting operation. Well, as they say, “The grass always looks greener on the other side of the fence,” and after a short time we knew we had made a mistake. While sticking it out for 7 long months the idea of Pope Brother Guide Service and Outfitting began to take shape.

We had 2 options find another ranch job or start our own outfitting business. It was no contest. We moved back home to Stonewall and Pope Brothers Varmint Express expanded to become Pope Brothers Guide Service and Outfitting. Experienced outfitters told me it would take 5 or more years to build a successful outfitting business. I was blessed and had enough business over those first years to contradict what I had been told. My vision of Pope Brothers was to build the business up to include my youngest bother Marcus hence the name Pope Brothers Guide Service & Outfitting. We accomplished that goal in 2004. In 2005 we added our second daughter Lila with her big sister Lily already on her way to becoming a great hunter Lila was sure to follow suit.

After working full time for a couple years, and helping run the taxidermy shop we established in 2011, Marcus took a job managing a local ranch to begin his own family. Jeremy is still my go to for technical support. Shortly after Marcus starting his own family endeavor.

Hunting, Fishing & Taxidermy in the Future

We have built a successful business with a solid reputation in the hunting industry through honesty and hard work. Early 2011 I received my Merchant Mariners Credentials or Coast Guard License which allows me to purchase a saltwater guides license in Texas. I have expanded the business adding Circle C Charters to offer salt water fishing trips on the side. For years I have talked with several people about taxidermy, and in July of 2011 we launched A2Z Taxidermy.

We have taken great pride in our family and in our businesses from their inception over 20 years ago now. I look forward to the years ahead of guiding hunts, guiding fishing trips, doing taxidermy, and building a global booking agency.